I did something I’ve never done before to get to Grain Store.

It was a chilly night, so I set off in the car to drive to Grain Store without considering the parking options. I found myself in Granary Square (the new Kings Cross development) with absolutely no other cars in sight and not the foggiest idea where to park.

I ended up 10 minutes walk away next to a council estate but by this point I was 20 minutes late to meet my friend and had visions of them telling her we had lost the table due to my tardiness. I decided to take a shortcut by meandering through the estate but then, even more awkward than having a car that needed parking, I was practically on York Way and in the right direction of the Grain Store but with a hip height barrier in the way. I had two options: turn back and be another 10 minutes late, or indulge in my adventurous side, take a risk and climb over. There was no-one walking past so I took the second option.

Our table was secure. The restaurant is large and open, busy and has good lighting.

I was disappointed by the menu; I don’t eat pork or shellfish but other than that am not a fussy eater and there was a large chunk of the menu that was off-limits for me. Out of a fairly limited selection remaining, we opted for wild mushroom croquettes and vegetable chorizo scotch eggs with fennel and aioli to start. The mushroom croquettes were a bit like risotto balls without the rice; they were perfectly pleasant but didn’t taste any different to a freezable canape from M&S. The vegetable scotch eggs looked exactly like a real scotch egg, the only difference being the meat was replaced by a vegetarian substance. They lacked flavour; they were fine with enough salt and pepper but you shouldn’t have to do that much work to be able to enjoy them. 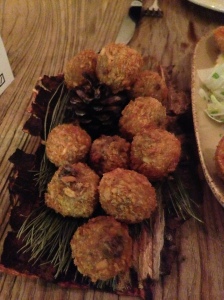 We then shared cranberry braised beef with root vegetable purees and wood roasted onions, and butternut squash ravioli with sage and mustard apricots. The beef itself was lovely. It was cooked well and tasted wonderful. The vegetable purees were so tiny you could barely see them on the plate. I didn’t like the butternut squash ravioli at all; I had one small ravioli and couldn’t eat another one. It was very sweet and sickly. 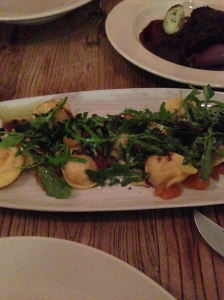 We didn’t have dessert so I’ll never know if things would have improved.

In conclusion, I don’t recommend Grain Store. I didn’t like the food and it was very tricky getting there!