I changed jobs at the beginning of the year, and in doing so I said goodbye to swanky Marylebone and hello to trendy West London. Naturally, the first thing on my agenda was after work dining/drinking spots, of which I soon discovered there are many.

Last night I went to Dock Kitchen, a converted wharf building overlooking the Grand Union Canal in Ladbroke Grove. This unusual site is also home to Tom Dixon’s (the furniture designer) shop so the restaurant is fully decked out with his furniture; I believe we were even sitting on Tom Dixon chairs while we ate.

When I opened the double doors to the actual restaurant, I was shocked at the lack of atmosphere and low noise level given that most tables were occupied. It remained quiet all evening; I think they could benefit from some background music to improve ambience.

The menu is divided into the a la carte or a set sharing menu which changes daily and can’t be chosen unless the whole table opts for it. Last night’s set menu was Sri Lankan themed, and our waiter explained that this is representative of the restaurant’s emphasis on experimental cooking, relishing the opportunity to use new ingredients from far away lands.

Whilst the Sri Lankan was tempting, it’s price was not. At £65 per head we opted for a la carte. After ordering we were brought bread to share dressed in olive oil and herbs. Between three, we shared two starters: spring fatoush (tomato, fennel, blood orange, pomegranate and crispbread) and a salad of radicchio, castel franco (lettuce-like, similar to radicchio) and aged ricotta. The individual elements of the spring fatoush were good but the dish felt slightly disjointed, like a collection of unsociable vegetables sitting on a plate, rather a salad where the components all work well together to form something great. The salad was better; it turns out I rather like aged ricotta, far tastier than youthful ricotta. It was fairly bitter, but no more so than would be expected from radicchio. 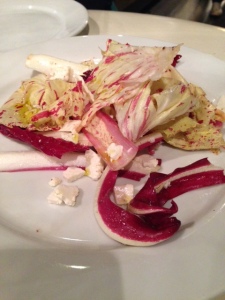 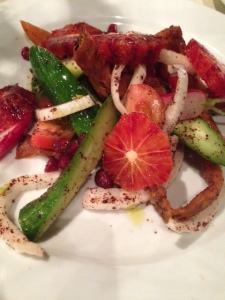 For main, I had coconut packed cod, with pickle, sambol, tamarind rice and papads. Sambol is a Sri Lankan dish often served as an accompaniment with rice. Papads are another name for papadams (as you would eat at the beginning of a meal in an Indian restaurant). The cod itself was delicious; it was cooked perfectly. I also really liked the mix of cod and coconut and the spices in the sambol, and the rice was very tasty. My friends both had grilled bream with tomato, agretti, olives and toast. Agretti is Italian name for saltwort. Again I’d never heard of it until now but it struck me as a cross between spinach and seaweed. We did some food swapping and theirs was also excellent. 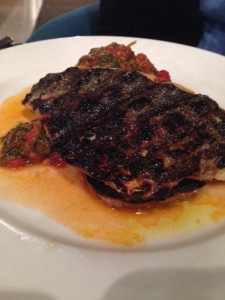 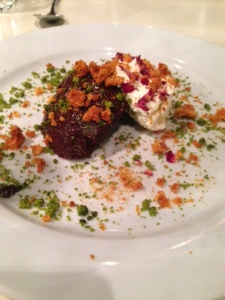 At £36 per person (including a small glass of wine) it isn’t cheap, but we had almost 3 courses and left feeling stuffed so I wouldn’t say it’s overpriced. If the atmosphere could be livened up a tad, I’d say this was a great place to go.