You may or may not have noticed that my most recent reviews have said something along the lines of “one feels like they could be on holiday whilst dining in this restaurant”. Well I am writing this one whilst actually on holiday in Tel Aviv, so since this restaurant by default passes the ‘holiday feeling’ test, it is under slightly more pressure to perform. Add to that the rumour that Ottolenghi himself is a big fan of this place and I had BIG hopes.

The first thing that hit me was the lack of music. If you think back to your recent dining experiences, it’s actually quite rare to sit in a restaurant with no music, however quiet or in the background it is. When I curiously asked the waiter why this was, he said, in a vexed manner, that it would distract the diner from their food.

The starters were superb! We shared three starters between five of us; yam pancakes (sweet potato), fig brioche with Roquefort and risotto balls. I didn’t know what to expect from the pancakes but I was pleasantly surprised. The fig was in the form of a glaze drizzled over the Roquefort and brioche; it worked very well. The risotto balls oozed mozzarella when cut open, and their accompanying tomato sauce was also excellent.

For main I chose cauliflower siniya; it is cauliflower baked in tehina with pine nuts. I asked the aforementioned waiter what siniya was and the enthusiasm in which he described the dish was what inspired me to order it. I wasn’t thinking rationally, for if I had been, I would have known I wouldn’t be satisfied eating only vegetables whilst my friends tucked into meat and chicken. It was a unique dish, but felt a little too much like eating halva for my liking, and I wouldn’t recommend it as a main unless you actually are a vegetarian, that likes halva. 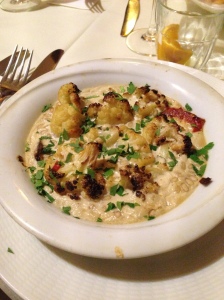 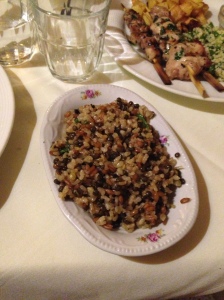 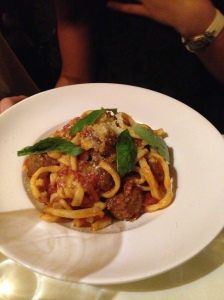 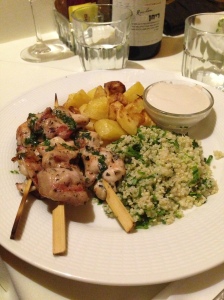 Three of my group ordered chicken skewers and one ordered beef meatballs with pasta. I tried both and thought both were excellent; the chicken was extremely succulent and flavoursome, as were the meatballs. To quote my friend, “there is an overwhelming sense of coriander.” I can assure you she said this with a smile on her face, intending the word overwhelming in the most positive sense.

A different waiter came over to take our dessert orders, but after hearing only one negative response, quickly scuttled away. Three of us, however, had a very good feeling about the choux pastry with cream and dark chocolate sauce so I went and found him to order it. It was certainly worth it for they were delicious, so much so that we were scooping up the leftover sauce with our fingers.

We paid our very reasonably priced bill and went on our way. I ordered badly for my main, but this is a superb restaurant, despite the lack of music. 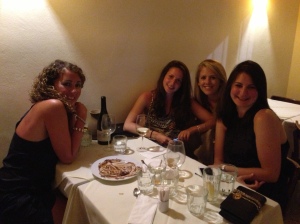 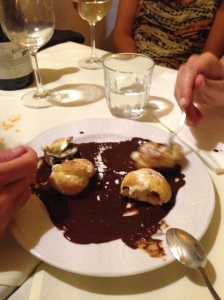 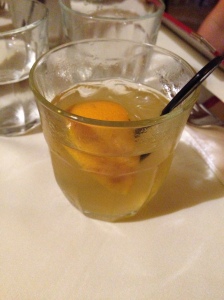