After hearing this response from a few Israelis, I had expectations of a flashy, small-portioned and over-hyped restaurant. Nevertheless I had been told that it was one of the best restaurants in Tel Aviv so was still very keen to try it.

My expectations could not have been further from reality.

My group of six arrived on time but were told there was no record of our booking. They were very apologetic and ensured us they would endeavour to seat us as quickly as possible. We parked ourselves on a street bench opposite the restaurant so did some people watching while we waited; everywhere you go here you see beautiful Israeli men and women, and the crowd at Abraxus only strengthened this thesis. There was also nothing flashy in sight.

By the time we were seated we were all ravenous so sat down and picked up the menu instantly. The descriptions gave me a good feeling about the place. I was particularly taken by “aubergine resting on tomato clouds swirled in tahini.” The menu is split into categories, one of which was printed in red meaning it ‘boils their blood’. We asked our very charming and friendly waitress whether this meant their speciality dishes, but were told that every dish is fantastic so not to take the categories too literally. 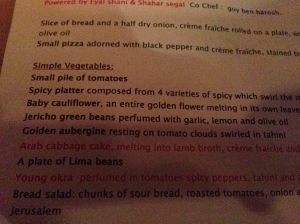 I was impressed that she brought out a Hebrew menu just to make sure that we didn’t miss out on any new dishes that hadn’t yet been included on the English menus, and methodically went through the menu explaining each dish and compiling a selection of dishes for us.

To apologise for the reservation confusion we were brought bread, tomato salad and a creme fraiche dip. The bread was a fresh rustic bread cooked with an onion in a paper bag; needless to say it was great. The tomato salad was a mix of regular and dark tomatoes in a scrumptious olive oil dressing and the dip was simple yet delightful. 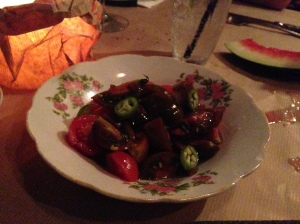 Dishes came out as they were ready. We shared baked cauliflower, salted sardines, zucchini pizza, aubergine with tomato and tahini.

The zucchini pizza had a strong oily aftertaste, but that aside, the food was incredible. The cauliflower was tender but not mushy and the tomato and tahini sauce very moreish.

Instead of bringing salt and pepper in the conventional way, our waitress sprinkled rock salt on the table in a few locations; this was a rustic and interesting touch.

We then shared beef carpaccio, steak and hraime (cousin to sea bass I think). I think the hraime could have benefitted from being filleted before served because there were a lot of big bones that made eating it fairly difficult, especially in the candlelit setting, but the way it was cooked may have made this difficult, as it was baked in a spicy tomato sauce and came straight from the oven to our table. The carpaccio was so tasty as was the steak; they were seasoned and cooked to perfection.

For dessert we shared a mango coulis sort of thing and chocolate mousse. Both were delicious, but after the rest of the food, I wouldn’t have expected any less.

A different waiter came to clear our dessert away and we asked him about a bar we were thinking about going to around the corner. He told us to scrap that and gave us recommendations about some very cool places. We went to one of them; as it turned out it was a little TOO cool for us, but nevertheless I was very pleasantly surprised by how friendly and charming him and our original waitress were.

I loved Abraxas. I would go again and again. 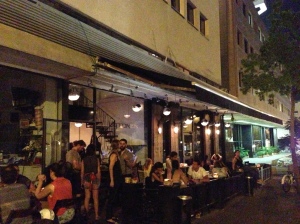