For those of you adhering to a modest January, with respect to both saving money and eating healthily, come back and read this post in February, since both will be difficult at Jackson & Rye.

My chum and I were in the market for an exciting dinner to overcome the ‘back to work tomorrow’ Sunday blues. We booked to go elsewhere in Soho but passed Jackson & Rye en route and decided to try our luck at nabbing a table. We were sat immediately, despite it being very busy (and buzzy).

It is dimly lit, the decor is cool and they play good music so they’ve done well on the surroundings front. 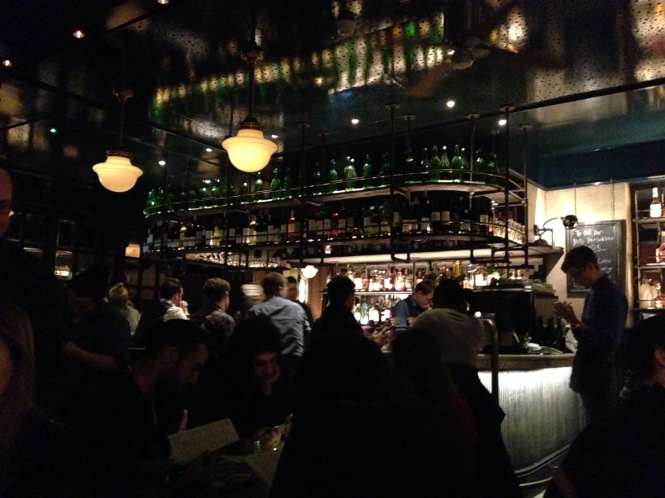 Whilst there is a fair amount of choice on the menu, for some reason nothing jumped out at me. For instance, I was initially interested in veal and beef meatballs in tomato sauce, but after being told they come literally as described (no spaghetti??) I decided against it… and whilst I lack the willpower to conduct an official frugal January regime, the steaks were rather pricey (starting at £17).

I settled on chopped raw tuna to start followed by lemon and rosemary chicken with shoestring fries. The tuna was fine but quite boring and lacking in flavour. When it comes to the chicken, I think I prefer Nandos. It was fairly dry and not particularly tasty. My friend had a chicken salad to start followed by salmon with new potatoes. She described her meal with the same excitement as I did mine.

For this non-exciting dinner we paid £28.35 each (no alcohol, only one diet coke each).

I wouldn’t rush to Jackson & Rye.