“Sushi is fish in haute couture” according to the waiters at Sticks’n’Sushi. At least that’s the slogan on their uniforms. The Google definition of haute couture is “expensive, fashionable clothes produced by leading fashion houses.” Replace ‘clothes’ with ‘fish’ and you’ve got a pretty accurate description of Sticks’n’Sushi!

They lied to me about my booking which I found terribly upsetting. I originally had a table booked for 9pm but tried my luck at calling up in the afternoon and seeing if they had something earlier. “You can reserve a place at the bar at 8.30pm if you’d like?” they said. “Great! See you at 8.30pm” I responded. Along I go at 8.31pm on the dot, ready to tuck into the Japanese version of a classic cocktail and spicy edamame by 8.45pm at the latest, and instead I’m told that it’s not possible to reserve a seat at the bar. It’s for walk-ins only. “You can wait here” they said as they guided to me a miserable (albeit quite comfy) sofa behind the bar that formed the end of someone else’s seat, next to said person’s rucksack. My waiting area had less charm than a tube platform. It was no wonder that when Jacob (my boyfriend and part-time comrade in restaurant ventures) arrived he discouraged our ordering drinks if they had to be imbibed there.

At approximately 8.45pm he somehow managed to get us seated at a communal and oddly shaped table in the centre of the restaurant, where I had to tuck in each time someone walked past, which became more and more difficult the further we were into the meal.

The menu had as many pages as a book for advanced toddlers. To make a decision we either had to order one of the set menus or pick one item per section. We opted for the latter.

We only ordered one portion of ‘regular’ sushi as you can have that anywhere, so chose black cod dragon roll. I don’t know about you, but as soon as I see that green dollop of wasabi I can’t help but break a bit off with my chopstick and mix it up in my mini dish of soy sauce, ready to be dipped in. The trouble is, it makes whatever you’re dipping in it taste exactly the same.

We had a salad of four wings. It had duck breast and chicken with leek, so I’m not sure what the other two wings were referring to. I had high hopes for the salad but they weren’t realised. There was nothing exciting about it. 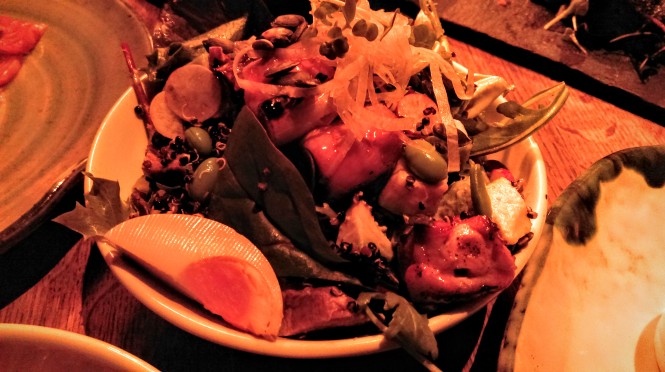 Beef tataki with smoked cheese, chives and yuzu dressing was unexpectedly cold and again failed to spark much reaction.

Hurrah for the lamb chop with miso herb butter! Finally a hot, juicy piece of lamb topped with lively flavours. Duck hearts in teryaki were a tad too slimy for my taste.

Soy cured salmon with red onion, shiitake and dill was accompanied by a delightful whilst intense miso mustard dressing.

Tuna tartare with avocado, shiso mix and pine nuts served with nori chips was excellent, as was grilled tenderstem broccoli with soy and sesame seeds and fried cauliflower with black sesame truffle sauce.

We were close to not ordering some of the best dishes for fear of picking boring ones. There’s a life lesson in there somewhere.

I had a Hanoko cocktail, consisting of jasmine tea infused shochu with elderflower, honey and lime. It went down pretty quickly, like an ice tea.

Dessert of four mini dark sweets bumped this restaurant’s rating from a 5 up to a 6. The combination is pre-selected for you but they were out of black sesame ice cream so we got coconut ice cream, Marcel chocolate cake with crystallised white chocolate, orange crème brûlée, and a dark fondant with chocolate caramel and peppermint heart topped with hazelnut brittle. I thought I was too full for dessert until this arrived, when my eyes lit up and I cracked into the crème brûlée.

In conclusion, it was an expensive meal. Service was bad at the beginning, good in the middle, but bad at the end when I caught the waiter’s eye to order dessert and he thought it best to finish off his banterous routine before coming over. The food undulated from disappointing to perfect, and it had a good atmosphere, if you ignore the loud whistling from the large groups of city slickers that drank too much shochu.