Pizza Pilgrims. How to begin writing about such a wondrous place… It was a cold Hallows’ Eve…The streets of Soho were crammed with people as we searched for Pizza Pilgrims with the help of Google maps. The dot reached its destination but there was no pizza to be seen. We looked around, wandered down a few side streets but still no pizza. I rang my friend who was already there; we had gone to the market where the Pizza Pilgrims van can sometimes be found. Luckily we were only a short walk away from the main restaurant. Pizza Pilgrims and/or Google – I urge you to update this as you run the risk of a hungry diner opting to eat elsewhere.

When we eventually arrived, I knew this place would be something special. It was heaving. I could smell the pizza and geez did it smell good. The atmosphere was so good it was spilling out onto the benches outside, where my friends were enjoying a drink and chatting to Tom, one of the owners, whilst they waited for a table. They learnt that Tom and his brother quit their jobs to go on a pizza pilgrimage (hence the name) around Italy in search of the best pizza. I think they might have found it.

After one drink outside, Tom came to tell us our table was ready. Decor is simple yet fun, with lots of movie posters on the walls, green checkered oil cloths covering the tables, and the music is great (Michael Jackson featured heavily). We ordered olives to start with; each attempt at getting one on the toothpick was like an Olympic event (unusually slippery little buggers) but once you got one, they were nice. We also ordered a carafe of Merlot which was lovely. 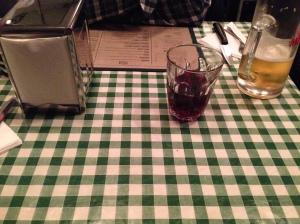 The menu isn’t extensive, but this seems appropriate given the so far non complex nature of the restaurant:

I initially ordered the margherita with extra mushrooms, but was quickly shot down.. “No you should have the bufala, it’s much better cheese!” “But I like basil, the bufala doesn’t have basil” I protested, at which point the waitress interjected.. “Don’t worry, we can give you basil on the bufala.” My mind was put at rest.

“One bufala with a regulation amount of basil” was how I received my pizza. Amusing staff are always a plus.

The pizza was fantastic! My group was right, the cheese on the bufala was excellent. The tomato sauce was so ample that picking up a slice would have been tricky. Crusts were plump. It had everything you could want from a pizza. It even had a slightly charred taste reminding the eater it had only seconds ago come out a real wood fired oven. 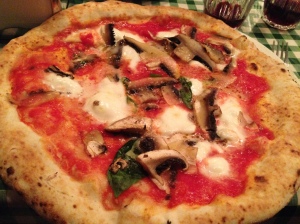 My group of four all loved the pizzas.

The desserts were novel to us so we felt we had to indulge. We shared vanilla ice cream with extra virgin olive oil and sea salt, and a nutella and ricotta pizza ring: 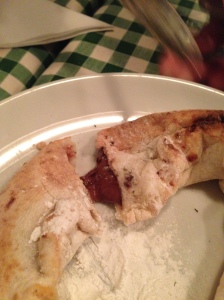 I’m afraid to say I didn’t like the olive oil ice cream. I didn’t enjoy the combination of the two ingredients, and couldn’t taste any sea salt. The pizza ring on the other hand was heavenly, and it was especially satisfying watching the hot and sluggish nutella and ricotta mix ooze out of the dough as we cut into it.

For four people the bill came to around £90, which I thought was pretty good value. I can’t recommend Pizza Pilgrims enough. I had a great evening there and look forward to my next visit!